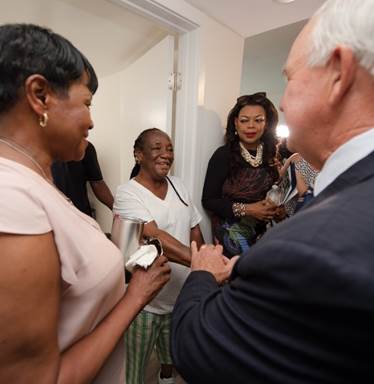 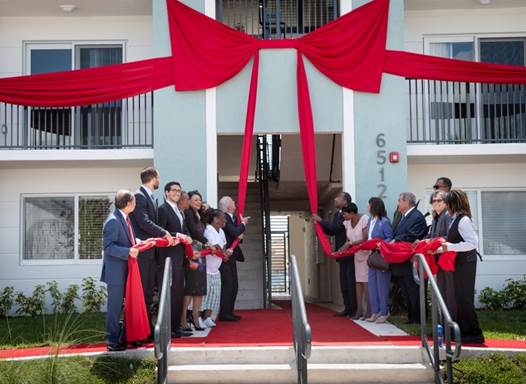 At left, Chairwoman Edmonson and Mayor Gimenez congratulate Sharon Gregory on moving into her new unit in the redeveloped Liberty Square project. At right, they join federal, state and local officials and developers in unfurling the ribbon on the project. (Photos by Ryan Holloway / Miami-Dade County)

“A lot of people said it couldn’t be done; but guess what, we did!” said a jubilant Chairwoman Edmonson, a champion of the project who reminded the audience that she grew up in Liberty City.

Liberty Square, which opened in 1937 as one of the oldest public housing developments in the southeastern United States, had become a symbol of blight and gun violence in recent years, prompting calls for its demolition and redevelopment.

Several officials noted that no residents have been displaced during the redevelopment project, which also is providing construction jobs for local low-income residents under project developer Related Urban Development Group. Secretary Carson said the project could become a model for housing developments around the nation, adding that it’s an example of “lifting people out of poverty and into the American Dream.”

Vernice McKinney, 35, a Liberty Square resident for the last eight years, was thrilled about the transformation and excited about moving into her new unit with her three children.

“Now I don’t have to worry about rats, roaches and mildew,” she said. “Everything’s better!” 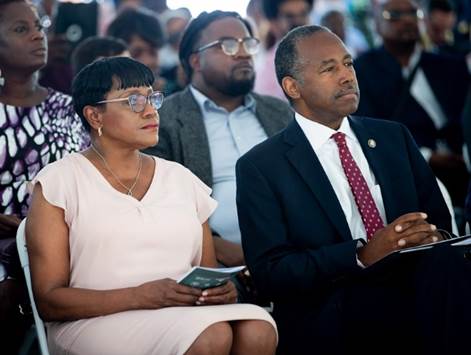 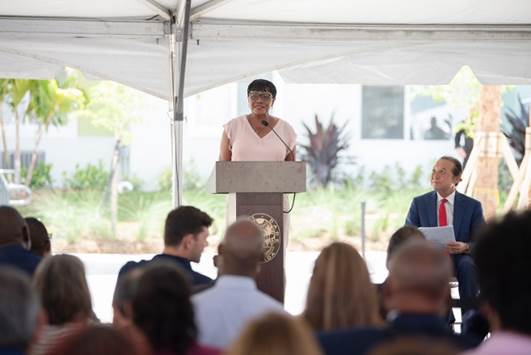 Chairwoman Edmonson, with U.S. Housing Secretary Ben Carson at left, and addressing the audience at right.