Celebrate the 90th anniversary of Miami-Dade Parks on July 27 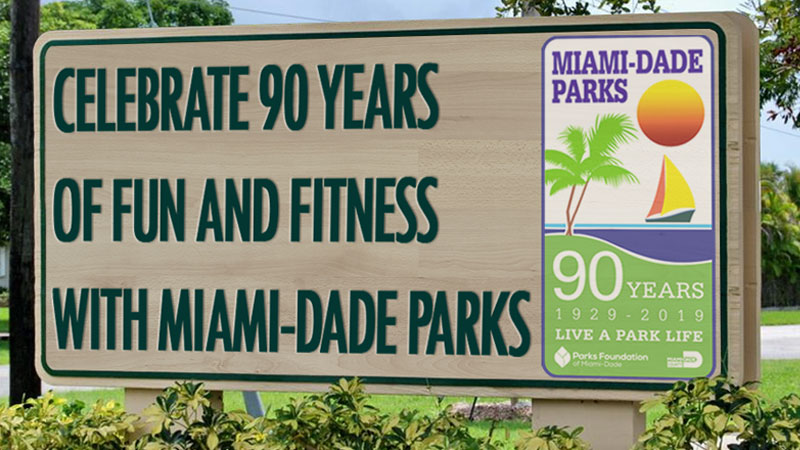 Over the last nine decades, Miami-Dade Parks has evolved into:

Celebrate Miami-Dade Parks’ 90th anniversary with one of this year's signature celebrations:

July is Parks & Recreation Month! Come out and celebrate with us during Summer Service Bash, a family-friendly signature service day hosted by Miami-Dade Parks and the Parks Foundation of Miami-Dade. This event is scheduled to take place on Saturday, July 27, 2019 at Amelia Earhart Park, 401 East 65th Street, Hialeah from 9 a.m. to noon (check-in opens at 8:30 a.m.). Community service hours will be awarded to all participants. Volunteer projects will include planting, mulching, landscaping, removing litter and other park beautification activities. For more information or for sponsorship opportunities, email diana.young@miamidade.gov

In 1929, A.D. “Doug” Barnes became the first employee and later became known as the father of Miami-Dade Parks when he persuaded Commodore Matheson to donate 80 acres of land for the first county park, Matheson Hammock. While the world was struggling during the Great Depression in the 1930s, the Miami-Dade park system was beginning to take shape largely in part because of President Roosevelt’s Civilian Conservation Corps (CCC) program which provided manual labor jobs related to the conservation and development of natural resources (parks). These men cleared land, engineered paths and roadways, dredged canals, quarried stones, and built the iconic structures that would symbolize our heritage parks.

Today, Miami-Dade Parks has created an award-winning park system that is more than just playgrounds and athletic fields. With high-quality out-of-school, sports-development, and summer-camp programs, as well as activities for active older adults and people with disabilities, nature centers and the preservation of national areas, the department’s foundation rests on three its pillars: Health & Fitness, Conservations & Stewardship and Placemaking.

Supporting its efforts is the Parks Foundation of Miami-Dade, a non-profit 501(c) (3).

Read more from the press release.