Share:
Chief Raied “Ray” Jadallah is a dedicated and distinguished leader with over 26 years of experience in public service.

Since joining MDFR in 2000, Chief Jadallah has had a distinguished career with Miami-Dade Fire Rescue (MDFR) and has had the distinct honor to serve in the fire service in the promotional ranks of fire lieutenant, fire captain, chief fire officer, assistant fire chief, and deputy fire chief.

As fire chief, Chief Ray Jadallah leads the largest accredited full-service fire-rescue department in the Southeast and the second-largest in the nation. Originally operating as a single-unit fire patrol in 1935, Miami-Dade Fire Rescue is responsible for dispatching resources over an area of approximately 1,883 square miles, including over 71 fire stations responding to all of the unincorporated areas of Miami-Dade County and 29 municipalities within the County. MDFR is staffed by almost 2800 employees, including over 2,200 uniformed firefighters trained in fire suppression and emergency medical response.

Chief Ray Jadallah had also been tasked as the Department’s Incident Commander for COVID-19 since March 2020. As the COVID-19 Incident Commander, he had put together a team that established and coordinated a department response plan utilized throughout MDFR and other Miami-Dade County departments. Additionally, Chief Jadallah has been assigned to various incident management team positions, including incident commander, for several of MDFR’s emergency incidents and pre-planned events, including Super Bowl LIV, hurricanes, FIU bridge collapse, Doral parking garage collapse, and the Shuckers deck collapse. In addition, Chief Jadallah oversaw one of the most significant complex incidents in Miami-Dade County’s history, the Champlain Towers South building collapse in Surfside, FL.

Chief Jadallah has attained numerous state and FEMA certifications. In addition, he holds an Associate of Science in Emergency Medical Services and a Bachelor of Science in Fire and Emergency Services Management. He is currently enrolled in the Master of Public Administration program at Barry University.

Chief Jadallah is married and has two daughters. 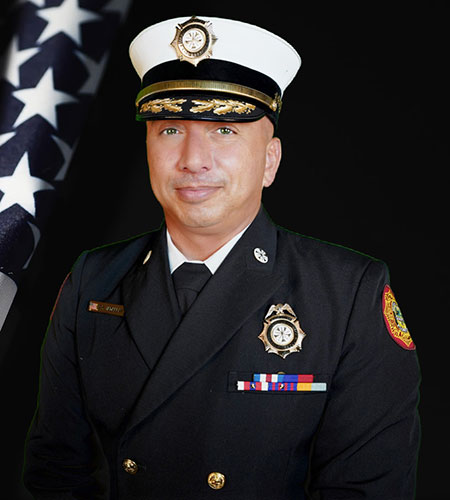